When playing games, one of the major aspects that really sells the whole experience is great audio. And in order to really enjoy that audio, you’re going to need to have some great headphones to fully immerse you in the experience.

A lot of headphones like to make the claim to be the best ever, but are they? They can’t all be the best. In this article, I’ll go over the actual best gaming headphones and why they’re the real chosen ones.

The best of the best for the most elite and serious gamers (that could be you!). I think this is by far the best entry on the list. At least in my personal opinion; I could be biased though because I’ve used these on several occasions and have been amazed every time.

That, and this happens to be the gaming headset my mother uses.

Before you start thinking of some silver-haired old biddy playing Candy Crush, you need to know that my mother kicks all the butt in competitive FPS and spends about 60 hours a week gaming. Who do you think taught me to play?

Anyway, this set is absolutely amazing. While not the highest priced on the list, it’s not a budget pick either. You’re definitely getting a killer headset that’s worth every penny and more.

Looking for a wonderfully delicious and sexy sound system with a built-in microphone to yell at your teammates? Then do I have the perfect gaming headphones for you!

Sleek, sexy, and full of the technology you need to fully embrace your epic gaming journey, this headset is sure to please.

The mic is top-notch, and users are raving about the quality. While the design itself is minimalistic, this set doesn’t really need a lot of fancy stuff on the outside.

All the cool bits went into making it sound incredible.

The problem with setting up your gaming rig is that while something can be highly reviewed and loved, not all platforms are created equal. Take for example, our previous friend, the Arctis Pro Wireless headset.

It is a beautifully preforming headset for PC and PS4. But it wasn’t compatible with the Xbox One. Not content with this gap in the market, SteelSeries created a headset that could be enjoyed by Xbox One users.

Enter the SteelSeries Arctis 9X, the wireless headset Xbox One users have been missing in their lives.

But don’t feel left out, PS4 and PC users. This set can be compatible with your setup as well!

That’s right, if this headset sounded great, but you didn’t want to shell out the high price of the Arctis Pro Wireless, then you too can enjoy this masterpiece at a much lower price without losing the awesome. 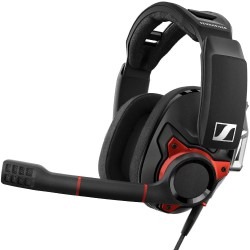 Sennheiser is one of my favorite companies for powerful, high-end sound experiences.

No surprise, the GSP 600 is no exception. This headset is thick with magical and punchy sounds. Highs, lows, everything in between? This beast of a gaming headset has you covered.

That big ol’ mic isn’t just for show, either.

The mic delivers your hilarious fart jokes to your exasperated companions with crystal clarity.

Users report excellent sound and nearly flawless pickup of even your softest whispered giggle as you take your foes down with glee.

If you’re in the market for a gaming headset with a high-range sound and functionality for a nice mid-range price, then your journey is at its end!

For a mid-range cost, you’re getting clear sounds and even some distortion reduction.

That’s a key component to a killer gaming headset so you can hear your opponents sneaking up behind you before there’s a knife in your spine.

The Sennheiser PC 373D certainly has my attention!

The mic is fantastic, and you can even customize the sound through their software. These folks understand gamers, and it shows in how this beautiful headset was designed.

Razer products are another of my favorites for PC gaming.

They make gear specifically for gamers, and the quality is about what you would expect from the high-end part of the gaming market.

They are always updating their look, their software, and their gear to meet the ever-changing demands of gamers everywhere.

Not everyone cares about how their gaming headphones look, and that’s cool. Whether you care about that or not, you have to admit these look pretty nice, even with the minimalistic appearance.

Good news is that isn’t the only thing they have going for them. They’re also comfy, light, and sound amazing.

On a less serious note: the name earns points because it makes me think of a rock and roll cat. Play me some sick tunes, Roccat.

I actually currently own the Razer Kraken, which makes me biased because it’s great.

With several awesome color options, a reasonable price, and a wide variety of uses outside gaming, it’s a shame it’s not more widely used.

I love the in-line audio controls, the comfy ear-cuffs, and the ample padding. The sound is spot-on, too.

Read Reviews from Real Owners for “Razer Kraken” on Amazon.

With five whole words in its name, it gets the title of “longest name on the list”. But does this bombastically named head cushion earn its long title, or is it trying to overcompensate for something?

Sometimes, companies like to add extra wacky, zany, and truthfully unnecessary words unto their products just to show off that they own a dictionary.

With all their focus seemingly on a Victorian-era length name, they overlook the actual product. Before you get your pitchfork and leave, you can rest assured that the name isn’t the only impressive feature here.

Smooth, delicious sounds ooze through the luxuriously thick but squishy headphones. You also have complete control over what you hear with some killer sound controls with the set linked.

If you’re budget conscious but still want your game sounds to be better than the Tin-man passing gas directly into your ears, then this is a fantastic choice that just may be well worth the chance.

It’s not going to blow you out of the water with its looks or its performance if you compare it to the other gaming headsets on this list, but what is lacks in flash, it makes up for in durability and reliability.

It can definitely hold its own, and for this low of a price, it’s actually quite impressive.

Read Reviews from Real Owners for “Astro Gaming A10” on Amazon.

Whether you’re in the market for some gaming headphones that are cozy, have superior sound quality, cost effective, or all of the above, hopefully this article has helped you to find the perfect pair for you and your game cave!