Is It Bad To Leave Darts In a Dartboard? 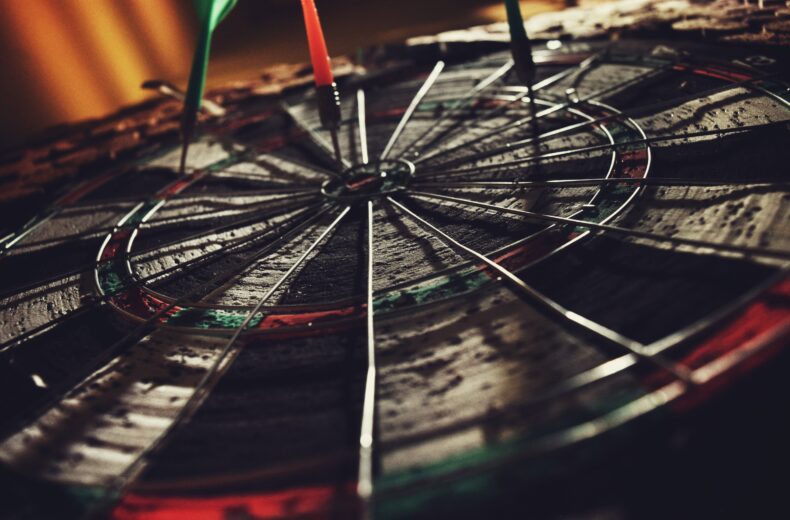 Whether you’re playing by yourself or shooting a few games with your pals, a good game of darts can be fun, relaxing, and a great way to spend some time. Less fun, however, is the clean up afterward. Leaving the darts in the dartboard may seem like an easy way to store them, or maybe you’ve never given it much thought. But does it affect the dartboard or darts in a negative way to leave the darts stuck in it, or is it totally fine to leave the darts in the board?

Is it bad to leave darts in a dartboard?

So, if you can’t leave your darts in the board, where do you leave them? Why exactly shouldn’t you leave them in? Is there a safe period of time you can leave them in for? If you have these questions, I have the answers for you!

by Oliver Buchmann on unsplash

Is it bad to leave darts in a dartboard?

A lot of us have probably been there: you have just got done playing a whole bunch of rounds of darts with your friends, it’s late, and you decide that you’re all much too tired to clean up the board afterward. What’s the harm in leaving the darts in, anyway? It’s not like they explicitly say not to do that, right? Well… Even though I personally have yet to see a dartboard come with a very clear warning not to leave or store your darts in the board itself, they really should. It’s actually bad if you do this too often or for too long.

Ask any professional darts player if it’s okay to leave your darts in after playing and, while you may get a few different answers scattered around here and there, the general consensus is no. They’ll likely tell you that leaving your darts in your dartboard, especially over long periods of time, just isn’t good for the overall health of the dartboard and may even damage the darts, too.

It’s usually recommended to remove the darts from the board as soon as you can. By storing the darts and the board properly, you’ll greatly increase the life of the whole set. Bonus? You’ll save yourself some frustration and money in the long run. Plus, do you really want a professional dart player to give you that disappointed look reserved only for the biggest of newbs?

I didn’t think so.

But why is it bad to leave darts in a dartboard?

So, the general consensus from pro darts players is that leaving your darts in your dartboard after a game does more harm than good. But why is that?

by Cassandra Dray on unsplash

The quality of the board can also determine how bad of an effect leaving the darts in might have. For example: the lower quality board you have, the more problems and more damage will probably appear. But the higher the quality of board you have the less likely leaving your darts in will have a negative effect right away. This can apply to all types of boards; sisal, electric, paper, etc.

How to properly store your darts

It may not seem too terribly important initially, but the proper storage of your darts can not only help to make it easier to find them all and keep track of them but may also help lengthen both their lifespan and your board’s. And a longer lifespan for both the board and darts means many more fun dart games further down the line and less expense for you! Since dart storage on the dartboard itself is highly discouraged, where is a safe place to keep them? Cupboards, shelves, and drawers are your friends! You can even go the extra mile and get a special box to store all of your darts in if you really wanted to be extra fancy with it. And since you’re concerned about how awesome your game cave looks and feels, I’m pretty sure you want to go the fancy route. I know I do!

Of these options though, the most convenient way would probably be storing them in a specially built dartboard cupboard. In this case, the darts would be safely tucked in right next to the board, all zipped up nice and sexy on the wall. However, any of these options are suitable for safe and convenient dart storage.

But what if you don’t have any space to store darts?

Not every game cave can be a super mega coliseum of wonder, so what about those times where space is limited or you otherwise cannot afford to have a special place to safely store your darts? Could there be a safe way to leave your darts on the board without harming the board or the darts?

Well, if push comes to shove and you have absolutely no more space to store your darts, but you still want to negate the damage you inflict to your board, you’re not out of luck. You can keep your darts on the board without causing too much damage by storing the darts on the part of the board you don’t play on. Typically, this would be the black outer rings.

What does that mean?

For the most part, most dartboards have the inner playing area and an outer area, which is usually black colored.

The actual play surface will have lines, colors, and other markings to designate it as the play space. The outer ring is generally undecorated. Basically, you’re looking for the part of the dartboard where you’d score no points and earn the laughter and ribbing of your friends if you hit it. Dartboards tend to be made of the same material all over. That means storing the darts on the outer black edges of the board instead of the inner play area can be decent in a pinch, all without harming the board or darts as much as just leaving them in the play area.

This will still cause the negatives I mentioned earlier: bigger holes, weaker surrounding area, and so on. But since we’re using the outer rings that aren’t typically used for games, we can save the inner play area from any undue harm. But you do still run the risk of damaging the darts over time.

Just remember: if you do decide to use this method, then always be sure to keep the darts as far away from the playing area as you can.

by Anastase Maragos on unsplash

One Response to :
Is It Bad To Leave Darts In a Dartboard?